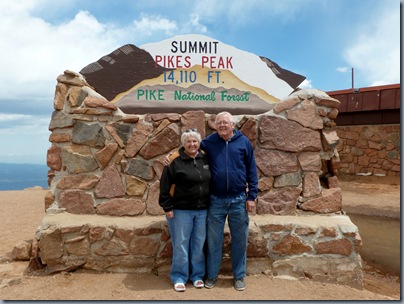 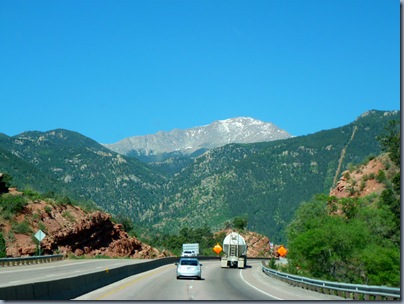 Jim had heard about all the races to the top of Pike’s Peak and had seen movies about it, so getting to the top has been on his bucket list. 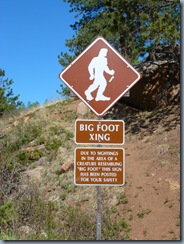 However, Pike’s Peak is 14,110 feet up in the air with about 50% of the oxygen found down at 6,800 feet. We had some long talks about whether we should go or not with his respiratory issues. A lot of people mentioned taking the Cog Train to the top but we decided we were going to do the drive to the top. That way if Jim started having problems breathing we could turn around and go back down. 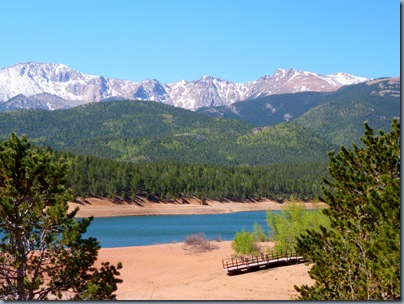 We made it to the top!!! And Jim did great. He did mention that breathing was more difficult up at the top (even I noticed I was having problem getting a deep breath) but he didn’t get sick and even walked around at the top a little bit. 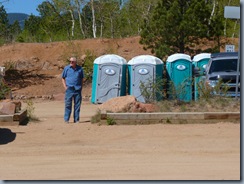 A beautiful bird. Once again, no idea what kind. 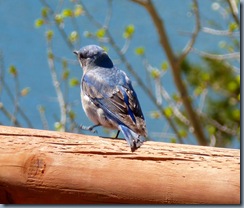 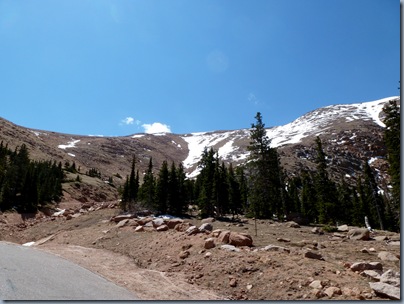 There are no guard rails and it’s a long, long way down the mountainside. Heights don’t really bother me but there were a couple of turns that I moved a little bit more to the center of the truck. 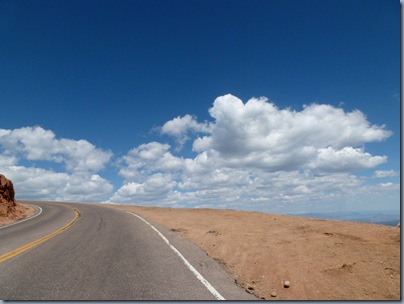 We took our time and pulled over so others who were in a much bigger hurry could pass us. I think our taking it slow gave Jim’s body a chance to adjust.

The whole upper part of the drive is nothing but switchbacks. I got a couple of pictures but they really don’t do the twists and turns justice. 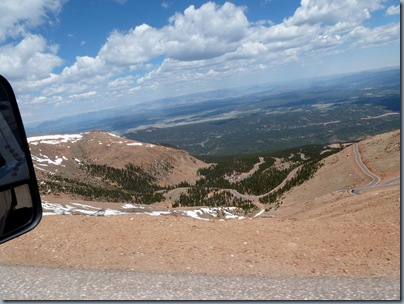 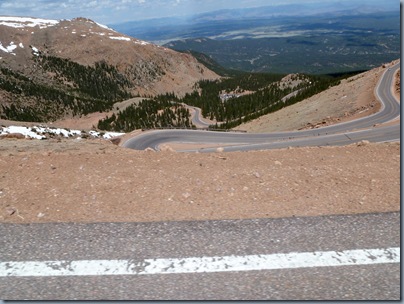 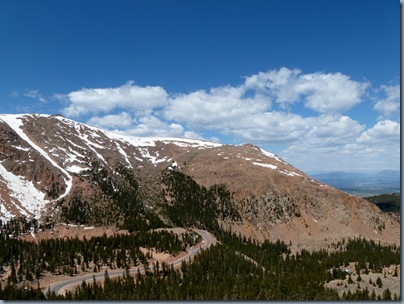 We got about a mile from the top when the Ranger stopped us. Seems a commercial was being filmed to show a Range Rover racing to the top of Pike’s Peak. 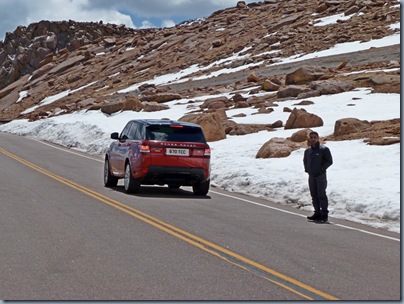 They were using a helicopter to do some of the filming and it was landing to refuel down closer to the bottom of the mountain. 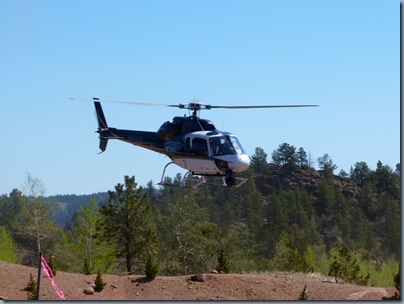 We got to watch the Range Rover make two runs to the top and come back down again. I thought it was rather interesting. Hopefully, some day I’ll see the commercial on TV. 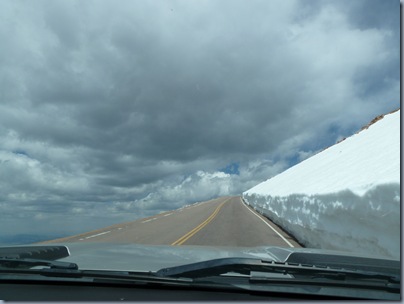 Jim told the Ranger that he could have pushed the Rover up to the top faster with his Chevy but they wouldn’t let him do it. 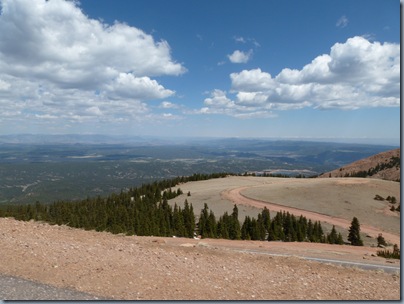 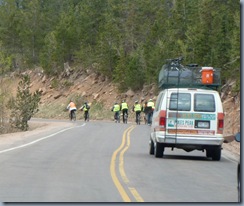 There were also a couple of bicyclists who were pedaling their way up. Now that is just plain crazy. I have no idea if they started from the bottom but we passed them on the way up and they arrived at the top while we were there. Other riders are driven to the top and then ride down. I think they’re crazy too. 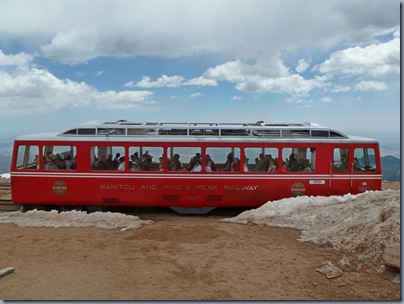 We almost had a traffic jam at the top there were so many people making the drive.

Jim’s altimeter app on his phone. 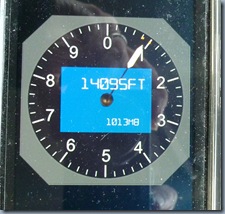 And then the Cog Railway arrived while we were at the top. Lots and lots of people. 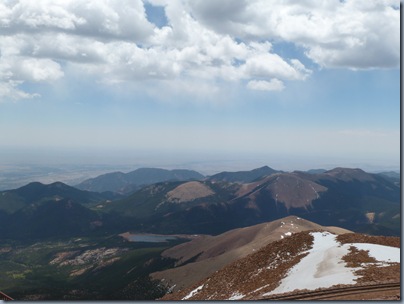 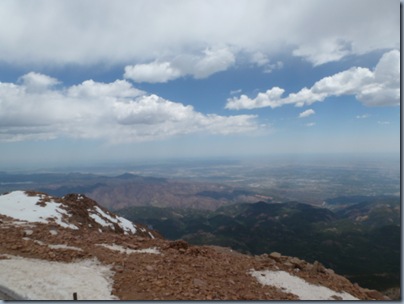 While at the top, it started to spit snow on us. Not much but enough to notice it. The first picture is on the way up. The second one is on the way down. See the difference in clouds. 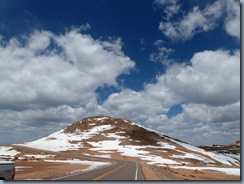 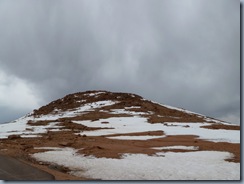 Saw this fellow (marmot, I think) bounding across the road. 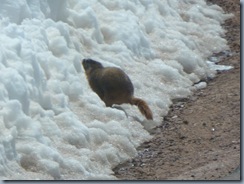 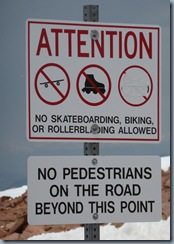 About a third of the way down there is a mandatory stop for a brake check. They want to determine if you’ve been riding your brake and burning them up. They tell you to use your lowest gear but some people just don’t get it. You can see the snowdrops on the windshield. 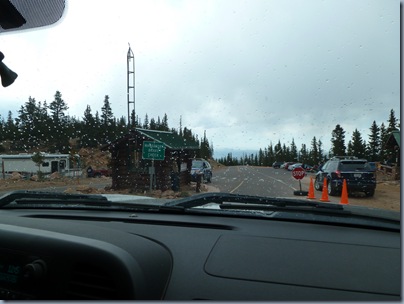 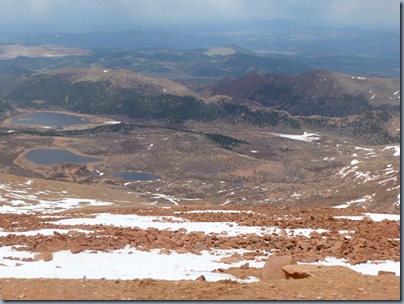 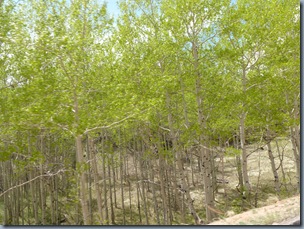 I had about doubts about the wisdom of doing this drive, but I am so happy we did it. What an experience!