Most of you know my hubby is a NASCAR fan. Has been most of his life. One of his favorite drivers of all time was Dale Earnhardt Sr. who died at the Daytona 500 in 2001 (hard to believe it’s been so long ago). Dale grew up in Kannapolis and Concord and the Dale Trail gives you an overview of what his life was like as a teenager. We took this drive back in 2009 but it’s fun to revisit. A lot of the business are no longer there and development has encroached on most of the areas that were country years ago.

We stopped at the Visitor Center, which is designed to look like a race garage, and picked up a map as well as a lot of other brochures.

You start out on Dale Earnhardt Blvd. Take a left and turn down Old Earnhardt Road where Dale often drove his bright yellow 56 Chevy – usually sideways – around two 90 degree turns. 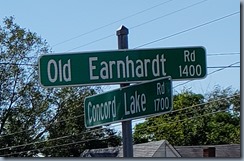 The next stop is at Ralph Earnhardt’s (Dale’s dad)grave. Ralph was called Mr. Dirt Track because he was a champion on the NASCAR Modified, Sportsman and Grand National circuits. He died of heart failure in 1973 while working on his race car. 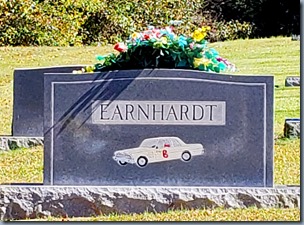 Dale is buried at the Earnhardt Estate in Mooresville, NC.

We continued driving down the streets that Dale would have cruised and outrun police officers on. One day while Dale and his buddies were cruising what they called Idiot Circle, when they saw someone drive by with its front lowered. They thought it looked cool so they went home to fix Dale’s car. They jacked the car up, pulled the front springs, cut part of the coils with a blow torch, put the springs back in lowering the car’s front end and were back on Idiot Circle in about 30 minutes. 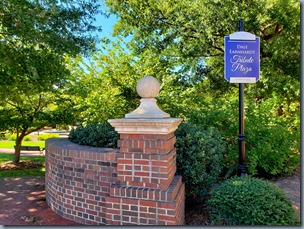 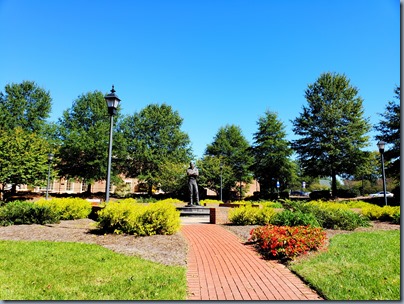 The 9 foot statue of Dale is dressed in Wranglers, cowboy boots and a short-sleeve shirt with button down collar. His go-to when he wasn’t wearing a racesuit. He sports his famous grin and his arms are crossed. His shirt is creased, his face shows wrinkles, and his sunglasses are in his shirt pocket. He faces south so the sun is always on his face. 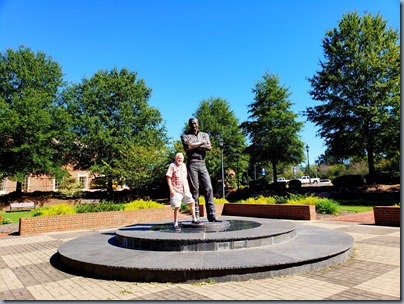 The statue’s pedestal has seven granite sections – one for each of his seven Winston Cup Championships. the inside wall incorporates 76 granite sections  - one for each of his Winston Cup wins. To commemorate Dale’s #3 car, all azaleas and daylilies are planted in groups of three. The benches around the outside are grouped in sets of three. the outside walk is laid out in an oval to simulate a race track. Eight lights shine down on the statue to signify his dad’s #8 car. The red daylilies, white azaleas and black granite showcase Dale’s signature colors. 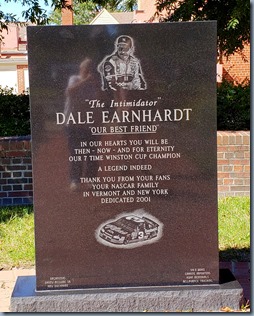 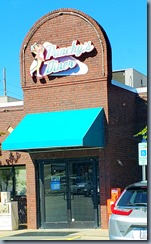 Our last stop was at Punchy’s Diner. They serve Dale’s favorite sandwich – tomato and Miracle Whip on white bread. Jim had one of those (except with mayo) back in 2009 but this time he had a steak sandwich and I had a hamburger. Punchy’s has a lot of fun decor. 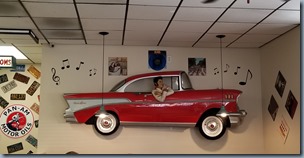 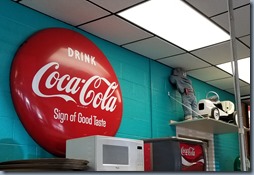 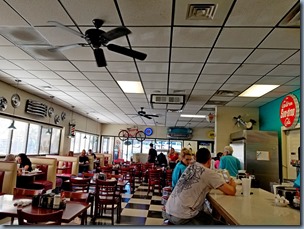 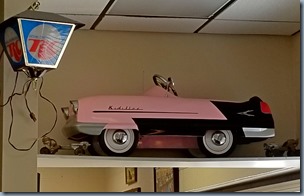