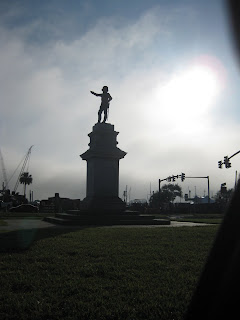 The mainland of North America was first sighted by the Spanish explorer and treasure hunter Don Juan Ponce de Leon on Easter, March 27, 1513. He claimed the land for Spain and named it La Florida, meaning "Land of Flowers".
According to legend, Ponce de Leon was searching for the Fountain of Youth and it is believed to be in Florida.
Between 1513 and 1563 the government of Spain launched six expeditions to settle Florida, but all failed. the French succeeded in establishing a fort and colony on the St. Johns River in 1564 and, in doing so, threatened Spain's treasure fleets which sailed along Florida's shoreline returning to Spain. As a result of this incursion into Florida, King Phillip II named Don Pedro Menendez de Aviles, Spain's most experienced admiral, as governor of Florida, instructing him to explore and to colonize the territory. Menendez was also instructed to drive out any pirates or settlers from other nations, should they be found there.
When Menendez arrived off the coast of Florida, it was August 28, 1565, the Feast Day of St. Augustine. Eleven days later, he and his 600 soldiers and settlers came ashore at the site of the Timucuan Indian village of Seloy with banners flying and trumpets sounding. He hastily fortified the fledgling village and named it St. Augustine.
Thus, St. Augustine was founded forty-two years before the English colony at Jamestown, Virginia, and fifty-five years before the Pilgrims landed on Plymouth Rock in Massachusetts - making it the oldest permanent European settlement on the North American continent.
Posted by Jim and Sandie at 5:52 AM