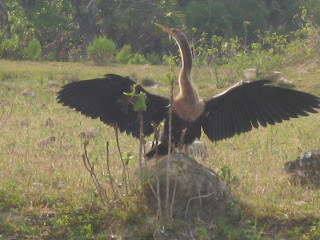 The Anhinga, sometimes called Snakebird, is a water bird found in the warmer part of the U. S. (especially Florida). The word "anhinga" comes from the Brazilian Tupi language and means devil bird or snake bird. It often swims with only the neck and head above water and it looks like a snake ready to strike - hence it's nickname.

Unlike ducks, the Anhinga is not able to waterproof its feathers. Consequently, feathers can become waterlogged, making the bird barely buoyant. However, this allows it to dive easily and search for underwater prey, such as fish and amphibians. It can stay down for significant periods of time.

When necessary, the Anhinga will dry out its wings and feathers. It will perch for long periods with its wings spread to allow the drying process. If it attempts to fly while its wings are wet, it has great difficulty getting off the water and takes off by flapping vigorously while 'running' on the water.
Posted by Jim and Sandie at 11:53 AM