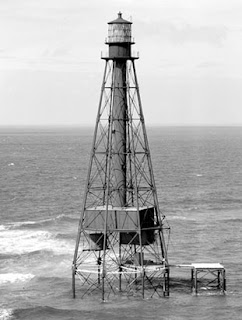 The Sombrero Key lighthouse was designed by General George Meade. Meade also suggested that the lighthouse be componentized. That way it could be built on shore to make sure all the pieces fit together, then disassembled and taken to the site where it would be put back together. The one thing that wasn't too well known was the effect of seawater on iron. Would it cause it to rust? The English had been conducting a test regarding this matter and had found that a process of galvanizing iron had protected the iron from seawater for over 15 years with no evidence of corrosion.
The lighthouse was under construction when a hurricane slammed into the Keys in 1856. This left the construction site in a state of disrepair. Meade once again started over and by March of 1858 the light at Sombrero Key was shining through its 1st-order Fresnel lens.
Posted by Jim and Sandie at 3:10 PM