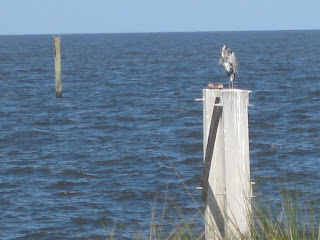 It took us awhile to find a place where we could actually see the lake because of the dike. Okeechobee means "big water" in the language of the Seminole Tribe and Lake Okeechobee is the second largest fresh water lake in the United States after Lake Michigan.

Small towns arose in this region, some very close to the lake. A small muck levee was constructed along the southern shore of the lake to protect those towns and farms. But then, in the 1920s, two major hurricanes struck south Florida. One of them generated a storm surge in the lake that flooded coastal areas and hundreds of acres to the south, resulting in approximately 2,000 deaths. To prevent this kind of devastation from reoccurring, the Herber Hoover Dike, an earthen levee, 20 feet high, was built around the lake. 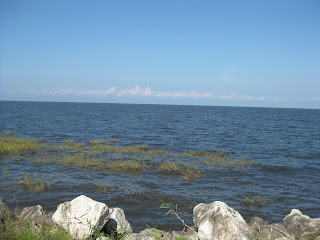 Standing on the edge of the lake is rather like looking out over the ocean. You cannot see land on the other side.
Posted by Jim and Sandie at 11:22 AM