I’m late getting this posted. We finally did take off on Wednesday and hopefully once we settle into travel mode, I’ll have time to read and comment on blogs again.

A slight set back in our planned take off. We’re now hoping to leave here on Wednesday instead of Tuesday.

The Bungalow’s fresh water tank decided to spring a leak. Jim spent a couple of days trying several different things to repair it and he finally gave up. RV Renovators on Main in Mesa could get it in the same day we called them. They did a plastic weld and we had the Bungalow back by 3:30 that day.

The triple digit heat also makes getting ready to leave difficult. By 9:00 a.m. it is already very warm outside so moving stuff from one trailer to the other or putting stuff away outside needs to be done in the early morning hours. We also move slower then we did 20 years ago.

I was really hoping it was going to rain before we left here because I wanted to make sure nothing leaks on the new trailer. But no such luck. So Jim climbed on the roof to check things out. Everything looks good and we’re hoping the monsoons don’t do any damage this summer. 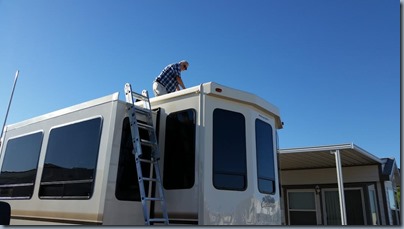 Rocky Joe and Skittlez have settled into the new trailer very nicely. Rocky still is a problem with his barking but since there’s nobody around in the park, (except Ginny and Mickey who love him) it’s not an issue. However, when we stop in campgrounds on our trip north, he will be curtailing our sightseeing. 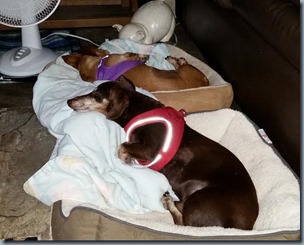 My next post will be from somewhere on the road. We are headed towards Santa Fe to check in with our son Steve and his wife Jen. Fun times ahead.