Wendover Will welcomes you to his town. 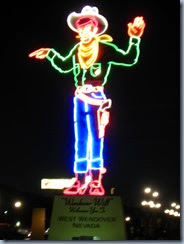 He is the world’s tallest mechanical cowboy at 90 ft. He has over ¼ mile of neon tubing. He was built in 1952 when he replaced a pole light, originally erected in the 1920’s, at the State Line Cobblestone Service Station that served as an oasis for travelers along the Victory and Lincoln Highways. The owner was William Smith who built a casino at the service station location when casinos became legal in 1930. It’s now the Wendover Nugget. Will was moved from the Nugget to his current location at the western entrance to Wendover.

Wendover, Utah, and West Wendover, NV, are actually two cities located in two different counties and states. That means the towns each have their own mayors, city councils, administrative and public works departments. The towns are served by two city police departments, two county sheriffs and two state highway patrols.

Right at the border, there are two huge casinos (on the Nevada side, of course) – the Nugget and the Mandalay Bay. We decided to try our luck at the Bay and each of us took our $20 off to the slots. I am notoriously unlucky and usually lose my $20 in about ten minutes or less. I actually played for over two hours on that $20 before it was gone. Jim did much better. He cashed in with $75. All was not fun and sightseeing though. We have a toilet that is leaking. Jim spent several hours trying to figure out what was wrong.

Put in new seals and tightened all the connections and we thought the problem was taken care of. Guess not. So tomorrow he’ll have to take another stab at it.