Guess where we are. 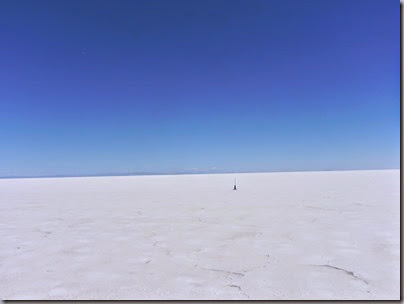 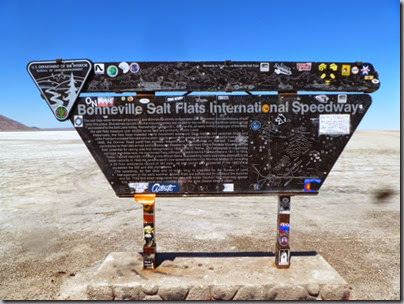 You all know how much Jim loves speed so we just had to check out the Salt Flats. This is the only thing to indicate you have arrived. There weren’t any time trials going on – guess most of them happen in August and November.

The first automobile speed record was set in 1914 at 114 mph by a guy driving a Blitzen Benz. Sir Malcolm Campbell set the first official land speed record at just over 300 mph with the Blue Bird in 1935. The jet cars arrived on the scene in the 60’s with Craig Breedlove’s Spirit of America and Art Arfrons Green Monster trading records at over 400 mph. Then in 1965 Breedlove brought a new Spirit of America – Sonic I and absolutely smashed the record with a run of 600+ mph. That record stood until 1970 when Gary Gabelich brought the rocket-powered Blue Flame to the salt flats and ran 622 mph.

We started out on the salt but it was really rough so we turned around. Couldn’t really figure out how they could race cars on it. But the little white note on the sign says – go about a mile out and enjoy the experience.

So we went back out and I’m sure glad we did. What a fantastic experience. You drive for miles and miles with nothing in front of you except more salt. 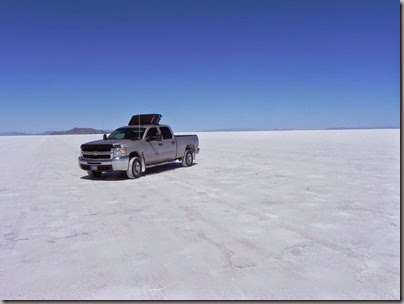 You really cannot judge how fast you are going because there are no telephone poles, or bushes, or trees or anything flashing by you. I glanced over at the speedometer (Jim is wishing he had hid it from me) and we were doing 80. Since this truck has got to last us many more years of RVing, I “suggested” he slow it down a little bit. Grudgingly he did so. 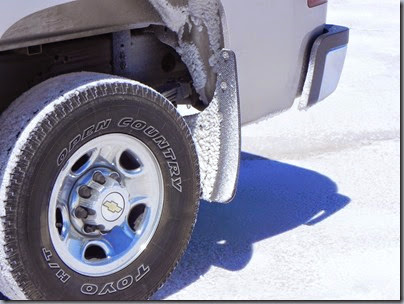 And this is where you go after you finish playing. 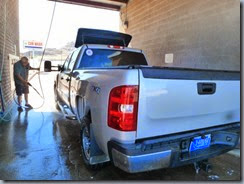 There were about four other vehicles that were out on the Salt Flats when we were there. You can take any kind of a vehicle because once you get past the first rough part, it is just smooth.

I am so glad we had this adventure. We had another incredible experience while in Wendover but I’m going to make a separate post.