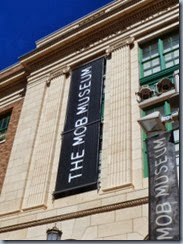 I’ve been trying to figure out what to say about the Mob Museum and I can only come up with “awesome”. 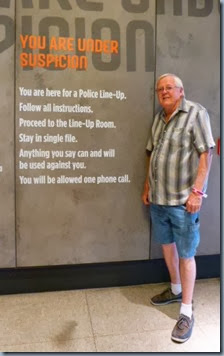 The museum requires a lot of reading and I must admit I had information overload. You could spend hours and hours and still have things to read.

They also have a lot of interactive presentations as well as movies to watch. It’s just incredible.

The following are a few items that I found extremely interesting. 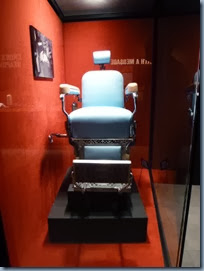 The story behind the chair was that in the morning of  Oct. 25, 1957, Albert Anastasia was murdered in the Grasso Barber Shop at the Park Sheraton Hotel in New York City.

The crime has never been solved, making it one of the great mysteries of mob lore. Anastasia, boss of the Gambino crime family, was the overlord of Murder Inc., which is reported to have enacted 400 to 700 murders. Anastasia’s was a rare “hit” in that it took place during the day, in a public forum and was the result of a leadership “dispute” between the Genovese and Gambino crime families.

The Tommy Gun – invented by John T. Thompson in 1919. The popularity of submachine guns with violent gangsters in the 1920s and 1930s was one of the main reasons given for passage of the National Firearms Act in 1934. 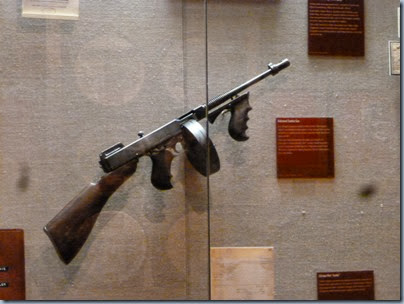 Jim got to try his hand at using one of them. 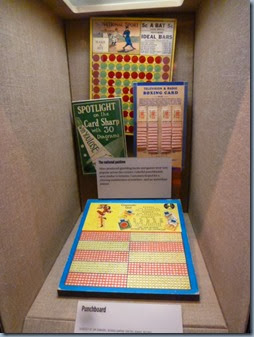 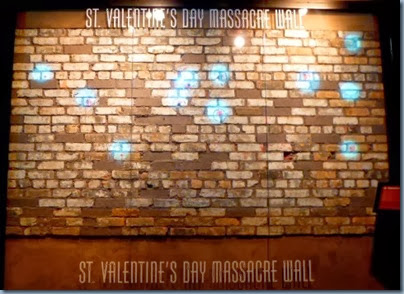 On February 14, 1929, five members of the North Side Gang run by Bugs Moran and a couple of gang groupies were lined up against the  wall of the garage at 2122 North Clark Street in Chicago's North Side, and execute; pumped with 90 bullets. It was the most infamous of all gangland slayings in America, and it savagely achieved its purpose--the elimination of the last challenge to Al Capone for the mantle of crime boss in Chicago.

Bugs Moran was not there because he was late leaving his apartment and arrived after the execution. The museum was able to acquire the actual wall where the men were shot.

Replica of the Electric Chair at Sing Sing. 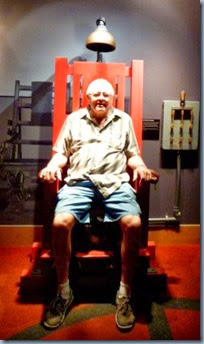 We also got to meet Frank Cullotta. Frank was nicknamed “The Las Vegas Boss” and was an enforcer for the Chicago Outfit, leader of the “Hole in the Wall Gang”, and a good friend of mobster Tony Spilotro.

After being arrested, Frank turned states evidence and worked with the FBI to bring down Spilotro’s empire in Las Vegas. Frank was also a consultant on the film “Casino”. In that movie, Scorsese had Frank recreate the Lisner murder scene and the man you see chasing the victim around the house, is the real Frank Cullotta who committed the murder in real life but received immunity for his testimony.

We also bought his book – Cullotta, The Life of a Chicago Criminal, Las Vegas Mobster, and Government Witness. I just started the book but I can tell it’s going to be a great read.

It did cost us $32 to get in the museum and we parked in the lot next door which was $5. Worth every penny we spent and then some. Would I go back? Definitely.