We’ve been reaching record highs here in the great state of Montana the last few days. It’s been so beautiful but lately the sun has been shining down upon us in full force. We also had a couple of storms pass through – one with hail but no damage. 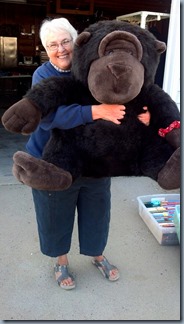 We have been garage saleing with my sister who is Queen of the garage salers. This is one of her purchases for $1. She loves to give them to her oldest son who is a principal at a high school in Idaho. He, of course, does not really appreciate having to haul them all the way back to Idaho so it’s turned into a family joke.

However we also found some treasures along the way. I’ve found some tops and Jim found some shirts. Hard to pass them up at only a buck a piece. Lots and lots of books so I haven’t run out of things to read this summer. A few books on CD to listen to while we travel down the road.

A couple of items for our “yard” in Apache Junction. Not sure what I’m going to try and plant in the cup – probably fake flowers cause I can’t kill those. I tried to get Skittlez to pose in the cup but she wasn’t having anything to do with it. 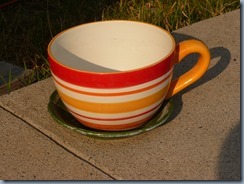 I thought the dog was really cute for a $1 so I grabbed it. 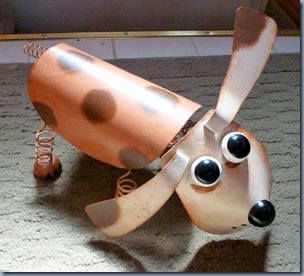 Jim found a cable TV cable, for when we’re in a campground that offers cable, for 10 cents. Also got a small cooler that he’s been wanting. 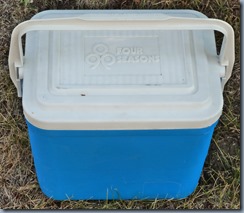 This was our big purchase. 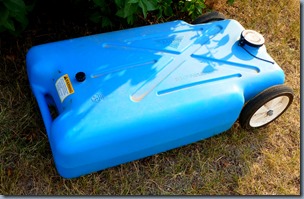 We had one of these that we lost along the way while driving through some construction last year. The gentlemen who was selling it had just sold his fifth wheel because of his wife’s medical issues. They only used it a few times before she got sick. Came with  hoses and hook-ups and all for $16.

We still have a couple more week-ends – wonder what new old treasures we can find.