Now that Quartzsite and Jim aren’t exciting to write about any more it’s time to go back and catch up on the other things we’ve been doing in Apache Junction. 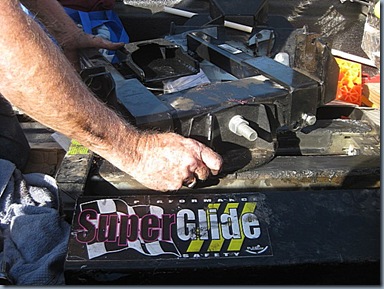 After our adventures of dropping the fifth wheel onto the bed of the truck, we received a comment from Palms Americana about the Bed Saver from ETrailer. We are now the proud owners of this bed saver and it certainly has relieved a lot of my stress. Thank you so much for the recommendation. 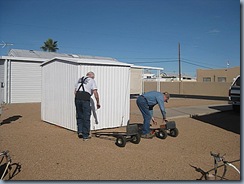 Before we went to Quartzsite for the second time we bought a shed. The guy parked behind us and his wife were having major medical problems and were selling their fifth wheel and heading back north to their doctors. He had just bought the shed from another person here in the park and he also bought paving stones (tiles? or whatever they are called). We had talked about getting a shed so Jim could collect more stuff and we would just leave our Christmas stuff behind. 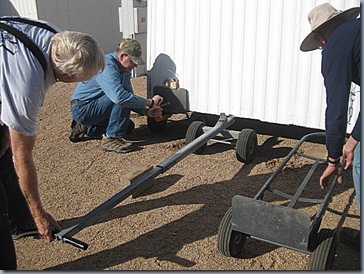 This worked out perfectly. There are a couple of guys here in the park that have figured out how to move these sheds and made their own special lever to use on them. Quite the set up. 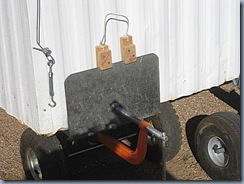 They insert two hand trucks under the shed with the handles underneath it. Then they have wedges and clamps to hold the wheels in place.

Then they swing it around, move it to our site and level it out. Really slick process. 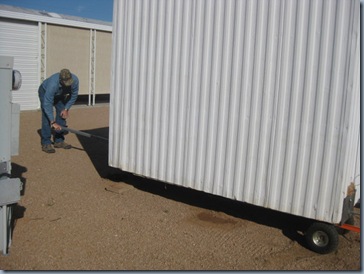 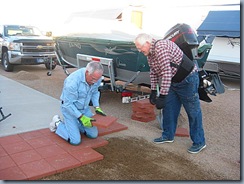 Cam helped (or I should say did) all the stones for us and showed us how to work sand down in between them to make them set up. 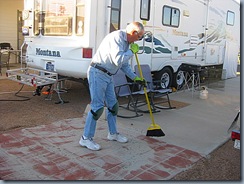 And wallah – we have a shed which I’m sure Jim will have filled as soon as his back has healed. 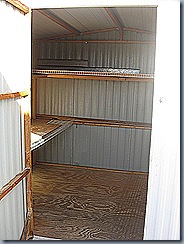 I’ve decided the guys in the park get bored and love it when somebody has a project they can all pitch in and help with. Guess it keeps them out of the bars. LOL