Our good friend Linda, who lives in Germantown, MD (a suburb of DC), joined us in Martinsburg for a couple days of sightseeing and visiting.

I have known Linda longer than I’ve known Jim. In fact, Linda was with me the night Jim asked me to dance. He also took us out for breakfast after the nightclub closed. Linda spent a week with us a few years ago when we were exploring New York and Niagara Falls. However, this time she had to get a motel room because our Bungalow really is only big enough for two adults. She does not like to have her picture taken so I had to sneak one of her. 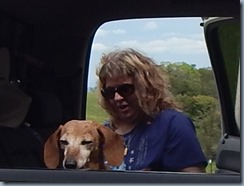 Harpers Ferry was our first destination. George Washington chose Harpers Ferry as a site for a U. S. Armory. The arsenal was built in 1794 and was one of only two in the United States. They produced most of the small arms for the Army.

Definitely no place to park along these streets.

Harpers Ferry is best known for John Brown’s raid on the armory in 1859. John Brown was an Abolitionist and on October 16, he led 21 men on a raid on the arsenal. During this period of time, assisting fugitive slaves was illegal and Brown hoped to secure the weapons depot and arm the slaves starting a revolt across the south. But it didn’t work out. Brown was captured, tried for treason and hanged in Charles Town.

The few pictures I have were taken as we drove by the buildings.

During the Civil War Harpers Ferry changed hands eight times between 1861 and 1865. Robert E. Lee led an army of 40,000 into Harpers Ferry in September of 1862. After the Confederate artillery bombardment, the Federal garrison surrendered. The surrender of 12,419 troops was the largest surrender of U. S. military personnel until WWII. 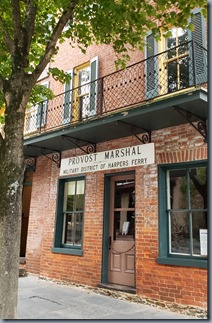 I was really disappointed with our visit because it is not set up for people who cannot walk very far. You have to park at the visitor’s center (absolutely no parking in town) and ride a shuttle bus to an unloading area. Then you have to walk back to the town. Since neither Jim nor I can do much walking anymore, we did not get to see very much. I thought maybe the visitor’s center would have a movie or some pictures or something. But there’s nothing there. A couple of Park Rangers who hand you a map and show you all the walking and hiking you can do.

Linda and Jim did get a great ice cream cone at Yup’s which was outside of the historic district. We also were able to stop and get a picture of the Harpers Ferry Bandstand. It was originally in an amusement park on Island Park. Island Park was completely destroyed by floods but the bandstand had been moved to higher ground and was saved. 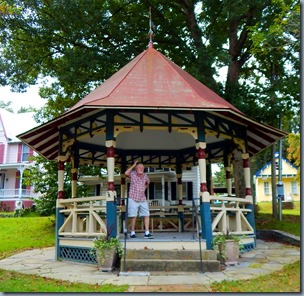 This building was John Brown’s Fort. It is now the headquarters of the Appalachian Trail Conservancy.