Did it happen or not? The UFO Museum in Roswell allows you to draw your own conclusion. The following information is taken from interviews with people that lived in Roswell during the summer of 1947. 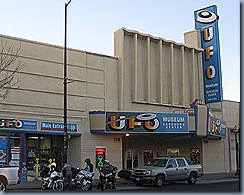 In the summer of 1947, there were a number of UFO sightings all over the United States. Sometime during the first week of July 1947, something crashed near Roswell.

"Mack" Brazel, a New Mexico rancher, saddled up his horse and rode out to check on the sheep after a fierce thunderstorm the night before. As he rode along, Brazel began to notice unusual pieces of what seemed to be metal debris, scattered over a large area. Upon further inspection, Brazel saw that a shallow trench, several hundred feet long, had been gouged into the land. 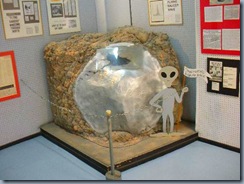 Brazel was struck by the unusual properties of the debris, and after dragging a large piece of it to a shed, he took some of it over to show his neighbors, the Proctors. The Proctors told Brazel that he might be holding wreckage from a UFO or a government project, and that he should report the incident to the sheriff.

A day or two later, (remember this is 1947, roads were in rough shape and you only went to town when you needed a bunch of supplies) Mack drove into Roswell where he reported the incident to Sheriff George Wilcox, who reported it to Intelligence Officer, Major Jesse Marcel of the 509 Bomb Group. 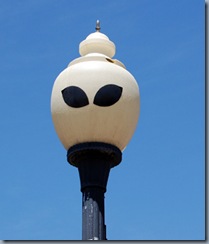 Major Marcel went to investigate Mack Brazel's story. Marcel and Senior Counter Intelligence Corps (CIC) agent, Captain Sheridan Cavitt, followed the rancher off-road to his place. They spent the night there and Marcel inspected a large piece of debris that Brazel had dragged from the pasture.

According to Marcel, the debris was "strewn over a wide area, I guess maybe three-quarters of a mile long and a few hundred feet wide." Scattered in the debris were small bits of metal that Marcel held a cigarette lighter to, to see if it would burn. "I lit the cigarette lighter to some of this stuff and it didn't burn", he said.

Along with the metal, Marcel described weightless I-beam-like structures that were 3/8" x 1/4", none of them very long, that would neither bend nor break. Some of these I-beams had indecipherable characters along the length, in two colors. Marcel also described metal debris the thickness of tin foil that was indestructible. For days thereafter, the debris site was closed while the wreckage was cleared.

On July 8, 1947, Walter Haut, public relations officer, finished the press release he'd been ordered to write, and gave copies of the release to the two radio stations and both of the newspapers. By 2:26 P.M., the story was out on the AP Wire: "The Army Air Forces here today announced a flying disk had been found". Hours later the first press release was rescinded and a second press release was issued that stated the 509th Bomb Group had mistakenly identified a weather balloon as wreckage of a flying saucer.

The military tried to convince the news media from that day forward that the object found near Roswell was nothing more than a weather balloon.

Meanwhile, back in Roswell, Glenn Dennis, a young mortician working at the Ballard Funeral Home, received some curious calls from the morgue at the air field. It seems the Mortuary Officer needed to get hold of some small hermetically sealed coffins,and wanted information about how to preserve bodies that had been exposed to the elements for a few days, without contaminating the tissue. 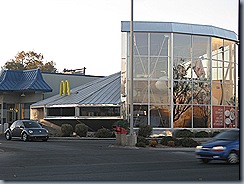 Also back in town, Walt Whitmore and Lyman Strickland saw their friend, Mack Brazel, being escorted to the Roswell Daily Record by three military officers. He ignored Whitmore and Strickland, which was not at all like Mack, and once he got to the Roswell Daily Record offices, he changed his story. He now claimed to have found the debris on June 14. Brazel also mentioned that he'd found weather observation devices on two other occasions.

Later that afternoon, an officer from the base retrieved all of the copies of Haut's press release from the radio stations and newspaper offices. 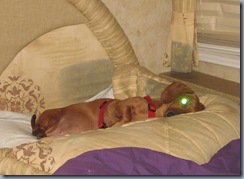 So UFO or weather balloon?

See those eyes? We have our own alien.