Jim decided that he just had to get that crud that’s been making the rounds this year. It wasn’t the flu – just a horrible head cold. So for almost two weeks, we haven’t done anything. He hasn’t felt up to fishing so you know he isn’t feeling good.

But on Friday he finally decided to come back into the land of the living. I, of course, had trailer fever so bad I was ready to go anywhere or do anything.

So we headed out to Coolidge. 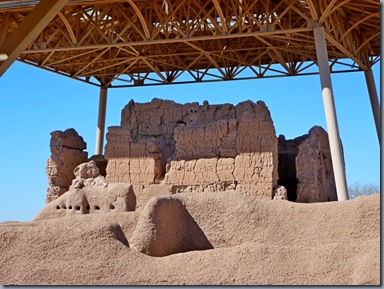 Casa Grande Ruins National Monument was the first prehistoric site to be protected by the US government in 1892 by President Benjamin Harrison. One of the largest prehistoric structures ever built in North America, its purpose remains a mystery. 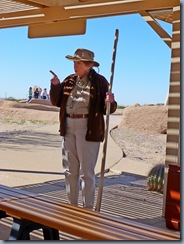 Archeologists have discovered evidence that the ancient Sonoran Desert people built the Casa Grande about 1350 and developed wide-scale irrigation farming and extensive trade connections which lasted over a thousand years until about 1450 when the Casa Grande was abandoned. 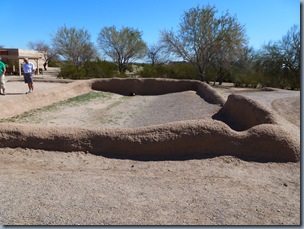 These are the tops of the walls of the rooms built around the Casa Grande. With budget restrictions further excavation is very limited.

Since the ancient Sonoran Desert people left no written language behind, written historic accounts of the Casa Grande begin with the journal entries of  Padre Eusebio Francisco Kino when he visited the ruins in 1694. 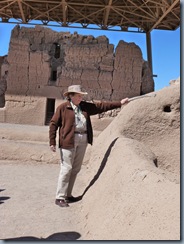 The ancient Sonoran Desert people used caliche mud to build these dwellings. It really is interesting to learn how hard they worked to build their homes and their lives.

During the 1860's through the 1880's more people began to visit the ruins with the arrival of a railroad line twenty miles to the west and a connecting stagecoach route that ran right by the Casa Grande. The resulting damage from souvenir hunting, graffiti and outright vandalism raised serious concerns about the preservation of the Casa Grande and the national monument status was granted. 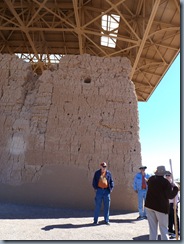 Notice the hole above Jim’s head. The holes – five in the east wall, one in the south, one north, and two west – appear to serve as a primitive seasonal calendar, indicating the spring and autumn equinoxes as well as summer solstice and lunar events. However, researchers can merely speculate what purpose this celestial understanding served for the ancient Sonoran Desert people culture, which flourished about 700 years ago.

Ground squirrels have made the Great House their home. 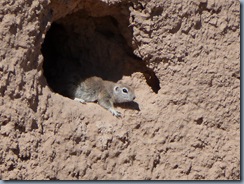 If you’ve never visited these ruins you need to include them in your travels. These ancient people were able to build amazing structures and understood astronomy. So much we still don’t know or understand.