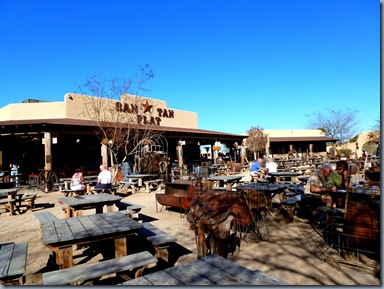 Last Thursday we went to San Tan Flat to celebrate Donna’s birthday. Donna is the one with the visor. 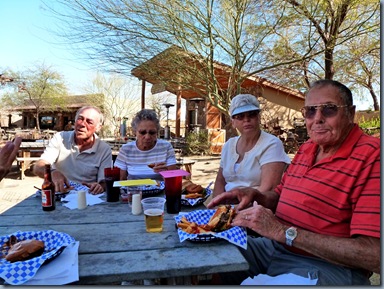 Great burgers and a fun place. But at that time I didn’t know I was in a den of iniquity. A place that, horrors of horrors, allows DANCING!! Of all things!

The following is part of a newspaper article once the case was resolved. Yep – the DANCING issue went to court. 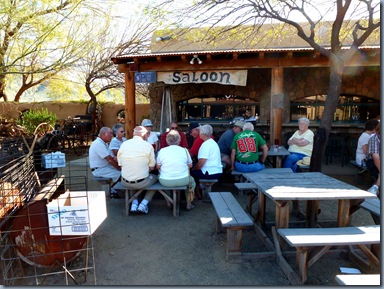 Kick off your boots and get ready to two-step because dancing is now allowed at San Tan Flat. Pinal County Superior Court Judge William O'Neil overturned a decision from the county Board of Supervisors that said the country-Western-themed restaurant was operating an illegal dance hall by allowing patrons to dance to live music on its back patio. This ruling came after more than two years of conflict when San Tan Flat neighbors complained about noise.

The case received several comparisons to the 1984 Kevin Bacon film Footloose, in which a small town bans rock music and dancing.

The Board of Supervisors had said Bell violated a zoning ordinance from 1962 that bans outdoor dance halls. The county contended the ordinance was designed to prevent excessive or disruptive noise and threatened to fine Bell $700 a day for each day he was found out of compliance. But O'Neil said the wording of the ordinance has nothing to do with noise. He added that Bell's business and profits rely on food and beverage sales, not dancing.

Bell sued the county for $1, saying the dance-hall ordinance violated his constitutional right to freely run his business. That $1 is about freedom and about civil liberties and the government not being allowed to overreach," Bell said Wednesday.

And the bright yellow signs that surround the dance floor of his restaurant warning patrons that dancing is illegal in Pinal County?

"Those are going to be collector's items," Bell said.

The details of the extent the county went to is fascinating reading at: http://www.ij.org/arizona-san-tan-flat-background

Quoting from this site:

Within months of their successful launch, Dale and Spencer found themselves the target of government officials acting at the behest of “neighbors” who live as far as seven miles away seeking to shut down the establishment.  Among the government’s actions: