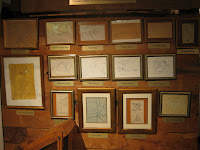 Whenever anyone tried to get information out of him, he would always give contradictory directions to where the mine was located. On many occasions, men tried to follow him when he left town, but Walz would always shake his pursuers in the rugged region around the mountain. By the winter of 1891, an old Mexican widow named Julia Elena Thomas, who owned a small bakery in Phoenix, befriended the aged miner. Apparently, they became romantically involved and Walz promised to take her to his secret mine “in the spring”.... but she never saw it. The Dutchman died on October 25, 1891 with a sack of rich gold ore beneath his deathbed.
Immediately after word reached town about Jacob Walz’s death, a number of men who had heard the Dutchman speak of the mine over the years rode out for the mountain in search of the mystery. They never found it... and in fact, two of the prospectors, Sims Ely and Jim Bark, spent the next 25 years searching in vain for what they called “The Lost Dutchman Mine”.The search has since fueled more than a century of speculation. Theories as to the mine’s location have filled dozens of books and pamphlets. Literally hundreds of would-be prospectors have searched the Superstition Mountain region and most have come home with little more than sunburns......
But there are also many who have not come home at all.
There is no way to guess just how many people have died in pursuit of the Lost Dutchman Mine. Some who have disappeared may have just quietly slipped away, unwilling to admit that they failed to find the treasure.... while others may have gone in secretly and never came out, their names recorded as a missing persons case somewhere. The death toll of the legendary Peralta Massacre varies between 100 to 400, plus there are the murders attributed to the Dutchman, Jacob Walz himself. He is alleged to have killed at least two men who found his treasure trove and is blamed for the death of his partner, Jacob Weiser, and others. There are also a number of people who were slain by the Apaches after they were found searching the mountain for the mine. .
Posted by Jim and Sandie at 9:45 AM