This is a long post but I wanted to record the info for future reference. 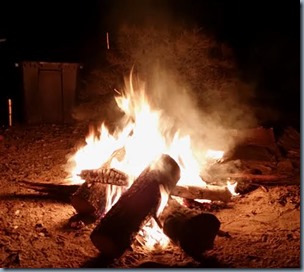 I broke one of my bridges about three years ago and finally decided to bite the bullet and get a new bridge. It ended up being a five tooth bridge because I had also broken one of the anchor teeth.

I contacted my dentist in AJ to get a ballpark figure on the cost for a bridge and was told it would $1000 a tooth or more. So that would be $5000.  Mexico sounds better and better.

I got an appointment with Rubio Dental Clinic in Algodones and they quoted me $550 per tooth. A whole lot better than the US dentist. My appointment was for 8 a.m. on Saturday.

Thursday night we were sitting around our campfire and Lynn mentioned that one of the guys in an RV parked out here had gone to San Luis Rio Coronado to the dentist and said he’d never go back to Algodones. I remember reading an article in the Escapees Magazine about going to San Luis for dental work and how pleased they were. I also read a couple of blogs about going to the same dentist in San Luis.

Delcie, Freddy, Ed and Jerry (Janice had a tooth pulled and wasn’t out with us.) 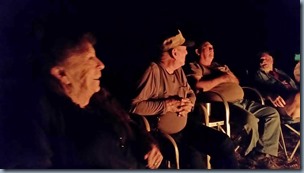 On Friday Jim and I decided to drive down to see about making an appointment because Dr. Bernal doesn’t have a toll free US number. San Luis is about 28 miles south of Yuma on Highway 95. There is a parking lot at the border for $5 and you walk across just like at Algodones. But what a difference.

From the moment you cross the border in Algodones you are bombarded with people trying to get you to go to their dentist or optical store. Others are trying to push their wares onto you and lots of others are begging for money from you. You learn to ignore them but it’s really aggravating.

Not like this at all in San Luis Rio Coronado. For one thing, almost nobody speaks English. It’s really hard to ask directions when we don’t speak their language. Everyone was really nice and wanted to be of help but we weren’t getting anywhere. One of the gentlemen found another guy who could speak English and he actually took the time to walk us over to the dental office.

There is nobody trying to sell you anything or trying to get you to go to their store. Very enjoyable other than the language barrier. San Luis Rio Coronado is a huge city – 250,000 people. It is what I expected of a city in a foreign country. Regular stores for the residents. Not a tourist town.

We walked into Dr. Sergio Bernal’s office and he asked what we needed. His English is exceptional. I explained my problem with the bridge and that I figured I might also need a root canal in a tooth on the top. He immediately took me back to the chair and took a look in my mouth.

He had to cut the bridge off in order to see what kind of damage had been done to the anchor teeth and one of them was broken. So my four tooth bridge went to five teeth. He explained what needed to be done and quoted me a price of $150 per tooth. I said go for it.

Modern buildings among the regular stores

He did all the prep work and took the impressions. Told me my bridge would be ready the next day. Then he checked my tooth on top and said that the pain was from food being stuck in the gap where my gums had receded. He cleaned everything out and told me what kind of floss stick I should get. 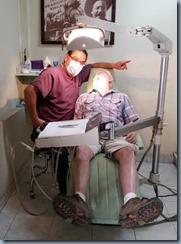 Then he ground a couple of Jim’s teeth that needed to be smoothed out. He was also having trouble with food getting caught under a cap so Dr. Bernal fixed it.

We were only there for about 1/2 an hour and we were ready to go until the next day. He worked up the cost and decided he only wanted $700 for everything and he didn’t want us to leave a deposit. That is just incredible.

The return trip across the border was a long wait. Dr. Bernal advised us that 20,000 people cross the border every morning into the US for shopping and work. However, it was a shorter wait then we’ve had trying to get back from Algodones.

Saturday afternoon we were back for the bridge. He put it in and started the adjustment work. He listened to what I told him about how it felt and worked with me until the bite was comfortable. I also have a bridge on the other side of my mouth and that has never really fit right. So Dr. Bernal also did some grinding on that side to make sure I was completely happy with my teeth. All of this for just $700.

The crossing back to the US was only 10 minutes this time. Note to self – go to San Luis in the afternoon.

Now, I want you to know that his office is definitely not a modern place with up to date equipment. It was more like a dentist’s office I went to as a child. It’s old and well used. But Dr. Bernal has been a dentist for over 30 years and I felt completely comfortable with him. He has a wonderful sense of humor and will take as long as you need to make sure you are happy with his work.

After leaving his office we stopped to get Jim a taco at an outdoor vendor. Once again, the guy did not speak English so Jim kind of used sign language to let him know what he wanted. He gave us a taste of the drink he was offering and it was really good but we have no idea what it was. The meat was too spicy for me but Jim really enjoyed it. 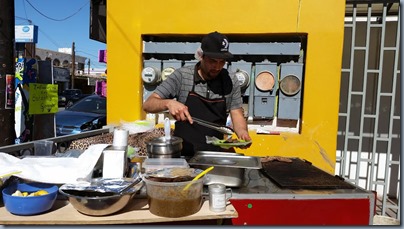 Went back today for a small adjustment that I needed. Jim dropped me off at the border and then took the pups up to Walmart to wait for me. I knew it wasn’t going to take long and there was no reason for him to go with me. I walked across the border, down the half block to his office and into his chair. Was done with the adjustment in about five minutes and headed back across the border. Only about a five minute wait. I will definitely go back to Dr. Bernal for any other work that I may need.