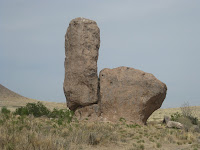 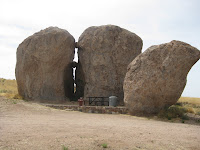 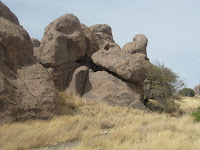 The initial stages of the Kneeling Nun eruption are likely to have produced large volumes of pumice that rained out of the sky, blanketing the surrounding countryside. The main phase of the Kneeling Nun eruption was the most violent. During this time, close to 1000 cubic kilometers of volcanic pumice, ash, and gas were erupted through the volcanic vent that had been formed by the earlier eruption. The vent would widen during the main eruptive phase, allowing large amounts of volcanic material to erupt very quickly. This material would move as a large, hot, turbulent cloud, traveling as far as 200 kilometers from the vent, and depositing volcanic material in it’s path. 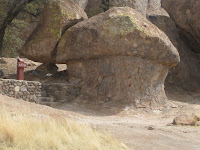 The layer of volcanic material produced by the ignimbrite eruption was still very hot at the time it was deposited. Because of this heat, the volcanic fragments in the layer of volcanic material compacted, or welded, to form the dense rock that you see at City of Rocks today. The rock layer is thickest near the vent, and becomes progressively thinner with distance from the vent area. City of Rocks is around 30 kilometers from the vent of the Kneeling Nun Tuff. 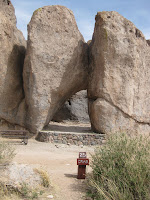 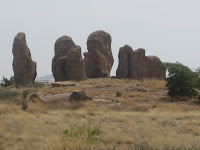 Continued erosion and modification of the pillar shape continues today and, in several million years, the City of Rocks may be eroded to a flat plane, 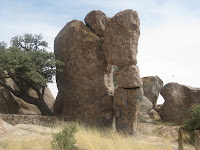 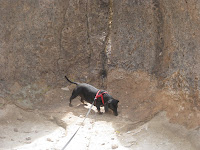 Located in the Mimbres Valley at the northeastern edge of the Chihuahuan desert at an elevation of five thousand two hundred feet above sea level, the "city" is a fantasyland of wind- and water-sculpted pastel rock columns. Only six other places in the world have similar formations. 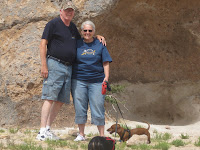 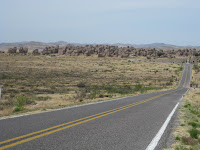